About Windwhistle Chalet in Whitsand Bay

Hello, we are Jane and Brendan Flynn, we like to think of ourselves as the custodians of Windwhistle Chalet in the Whitsand Bay area of Cornwall. 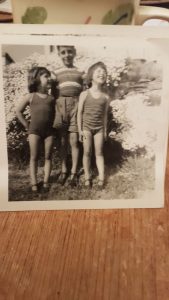 Life growing up in the West Country was full of fun and adventure.  My family, there was 7 of us including my parents, came from nearby Plymouth. My parents loved Whitsands and we first stayed in a chalet in 1959 when my twin sister and I were just 11 months old. My parents bought a chalet shortly afterwards and it was start of my love affair with Whitsands!

As children we had tremendous freedom to explore the ever changing beaches and rock pools. We would go out for the day and return when we were hungry. I loved to swim, and our swimming lessons were in a rock pool at Tregonhawke. I could swim by the age of 3.

My dad used to take us on the beach at low tide to go fishing at midnight with our fishing equipment and Tilley lamps. We learnt how to dig for bait such as sand eels and razor fish and to avoid weever fish. We would then put the bait onto the ground line hooks. My brother, who was 3 years older than us twins, had the dubious honour of swimming out in the cold water to put the ground line beyond low tide level. I can’t ever remember feeling jealous of this honour!

We would then climb up the cliff very carefully in the dark and my mother would be waiting for us in the chalet with hot milky cocoa. Hot cocoa has never tasted so good since.

The next day about midday when the tide was low, we would go down onto the beach and my brother wade out in the sea to retrieve the ground line which was marked by cork floats and we all gather around to see what we had caught. We caught bass, plaice, turbot (if we were really lucky), and conger eels. My mum used to cook the fresh fish for us and we would love it.

My elder sister used to take my twin and I for long walks and some days we would get a bus from our home in Plymouth to Stonehouse to get the Cremyll passenger ferry to near Mount Edgcumbe. We would walk through the beautiful countryside to Whitsands and it was like escaping into a new world.

We became experts on the local flora and fauna, there were no mobile phones or iPads so we learnt them through reading and using the I-Spy books. We liked to explore, and we used to lift stones to see if we could find adders, slow worms and lizards… I think my parents were ignorant of this foolhardy behaviour, thank goodness.

We were early instigators of recycling – for us it was a fantastic way of making money. Every day after the Grockles (the visitors) left the beach, we would go down with bags and collect all the empty glass lemonade bottles. We would carry them up to the chalet and decide what treat we would buy at the shop. 10 bottles in those days would buy a family block of ice cream which was a special treat.

All year-round swimming in the sea was something we loved to do. My mum would tell us not to bring our swimming costumes especially in the winter months when we decamped to the chalet, but we sneaked them in and braved the waves – this is something I no longer do!

We were very lucky as some friends had canoes which we were allowed to use. We used the canoes to fish and we saw porpoises chasing shoals of fish, we’d catch pollock and mackerel. When I was 12, I was canoeing by myself quite a way off shore and suddenly caught sight of a large fin and a large dark shape near my canoe. Momentarily I panicked but quickly realised that it was a basking shark which was completely harmless. I carefully paddled away in case it overturned my canoe!

We made lots of friends at Whitsands and we often forgot the time when we were on the beach and the tide would come in. Many a time we had to swim around the rocks to get to the cliff path with our bags held aloft with one arm to keep them dry! If we felt really daring, we would climb up the cliffs and make our own paths – not something I would recommend these days!

Blackberry picking was an annual event, we knew all the best places to pick them and used an old walking stick to get the juicy ones just out of arm’s reach. With our fingers and mouths stained purple with blackberry juice we’d take them back to the chalet and pour fresh milk from the farm and a little sugar on them and put them in the fridge overnight for a simple but delicious breakfast. We collected the milk fresh from the farm in 4 pint milk churns, we’d watch the farmer milk the cows and it was still warm when we got it. The next morning we’d race to get the first portion of milk which was so thick and creamy.

We learnt most of the names of the beaches and rocks such as Polhawn, Wiggle, Treninnow, Fishermans, Tregonhawke, Chambers Rock, Main Beach, Lucky, Frying Pan, Freathy, Grotto and Tregantle.

The varying tides and shifting sands would reveal old ship wrecks such as the Chancellor steam trawler at Treninnow 1934, Daisy at Freathy 1903. My uncle was Bosun of the Devonport Dockyard and we got to see the launching of the HMS Syclla in 1968, this ship was sunk in Whitsand bay and is used as a diving attraction and the buoy marking this can be seen from Windwhistle.

It is approximately 500m from the wreck of the liberty ship James Eagan Layne sunk in 1945, which has been a popular dive site for many years.

Every year but one I have stayed at Whitsands and I never tire of the beautiful view and the feeling of coming home. My children had their annual holidays at Whitsands and enjoyed the freedom and pleasure of a simple life.

Our lives were not ruled by time but the weather – when it rained we stayed in and played board games or cards, a tradition which we still carry on.

If you have any questions regarding the area, the property or availability please drop us a line

We are here to help

Have Questions? - Ask Them Here